I was sitting in my therapist’s office in Brooklyn, answering his questions from an OCD diagnostic test, when he asked me something particularly unexpected.

“Do you have homosexual thoughts?”

Do I have homosexual thoughts? Over the course of the diagnostic, I’d been asked a number of odd questions, including ones about my hygiene habits, whether I tend to visualize violent scenarios, and whether I believe numbers have magical meanings. But this question felt completely out of left field—and as a bisexual woman, I was more than a bit offended.

In the moment, though, I laughed it off, reminding my therapist that I was bisexual and thus obviously had homosexual thoughts. (He, for the record, was gay, and merely reading the question off an official diagnostic form.) But years later, when I thought about that clumsily-phrased question, I was finally able to piece together what, exactly, it was supposed to be screening for. Stranger still, I realized the problem it was supposed to suss out was actually one I’d been struggling with for years—one I’d assumed was just garden variety sexual-identity questioning.

Although it’s not as well-known as OCD subsets like contamination OCD (an obsessive fear of germs and infection) or compulsive counting and ordering, sexual orientation OCD (SO-OCD) is a very real, and very painful, manifestation of OCD that’s estimated to afflict about 10 to 12 percent of OCD patients, says clinical psychologist Simone Leavell-Bruce, PsyD. With OCD impacting up to 3 million adults in the U.S., it’s possible that anywhere from 300,000 to 375,000 people suffer from SO-OCD.

And that number could easily be an undercount. “Sexual obsessions are underreported because they’re taboo. So these rates are likely higher,” says Dr. Leavell-Bruce. Additionally, there are therapists operating with a limited understanding of what SO-OCD looks like in all its forms, which may mean they miss it, as I experienced firsthand. While I was properly diagnosed with OCD, my SO-OCD subset was not flagged because the diagnostic did not factor in the possibility of SO-OCD beyond “homosexual thoughts,” which wasn’t relevant to me. Had the question been more open ended—asking for instance, if I ever had doubts about my sexual orientation—there’s a better chance that it would have been flagged; the intensity and quality of those thoughts felt exactly like my other OCD obsessions.

What is sexual orientation OCD (SO-OCD)?

Until very recently, SO-OCD was generally referred to as “homosexual OCD” (HOCD) or “gay OCD,” and was thought to specifically afflict heterosexual people.

Though it’s hard to pinpoint the exact moment when SO-OCD became the more accepted term, Dr. Leavell-Bruce recalls HOCD being commonly in use around 2013, towards the beginning of her practice. And while heterosexual people have long been seen as the primary sufferers of SO-OCD—hence the question about “homosexual thoughts” that popped up during my diagnostic—SO-OCD can affect anyone of any gender or sexual orientation and can develop at any age. “It’s about [a fear of] living a lie or being a fraud,” says Dr. Leavell-Bruce, noting that the fear can manifest in many different ways, depending on the person.

Even the most seasoned clinician can have trouble distinguishing between healthy identity questioning and OCD, says Terence Ching, PhD, a postdoctoral associate at the Yale OCD Research Clinic. But the fundamental distinction is this: When someone has SO-OCD, thoughts about their sexual orientation lead to “a lot of distress,” says Ching. That distress triggers an immediate urge to get rid of the thought—through recounting your sexual history, avoiding whatever instigated the thought, performing a ritual, or some other compulsion.

Emma Gordon, a 41-year-old straight woman with SO-OCD, has spent the past several years paralyzed by the fear that she might be a lesbian, even though she knows she’s not interested in a relationship with another woman. “I get scared whenever I have a fight with my partner and start thinking about whether men are meant for me or not,” she says, noting that previous failed relationships with men just added more fuel to the SO-OCD fire.

But for me, SO-OCD has looked a little different. As a bi woman, I was afraid I was lying about my queerness, and that I’d eventually be revealed as a straight woman who was just trying to get attention.

Erica*, 23, is also bi, but in her case, SO-OCD manifested in a different way. “I was afraid of being a lesbian, not bisexual, because I didn’t want to leave my boyfriend.”

Some of those fears might sound like typical sexual-identity questioning. And it’s normal for people to occasionally wonder if their identities might be more expansive than previously realized, or to reassess their attractions altogether, says Ching. But while a questioning person might feel shame or anxiety over their identity, it’s usually mixed with curiosity and pleasure; in contrast, people with SO-OCD gain no joy from their intrusive thoughts.

And SO-OCD doesn’t lead to any revelations or self-discovery. Instead, it traps people in an endless loop, where obsessive thoughts about one’s sexual identity fuel compulsive behavior which serves to further intensify the obsessions, with no relief in sight.

In my case, those compulsions included a “mental review,” in which I’d force myself to think through the various women I’d dated and crushed on in the hopes of “proving” my queerness to myself. 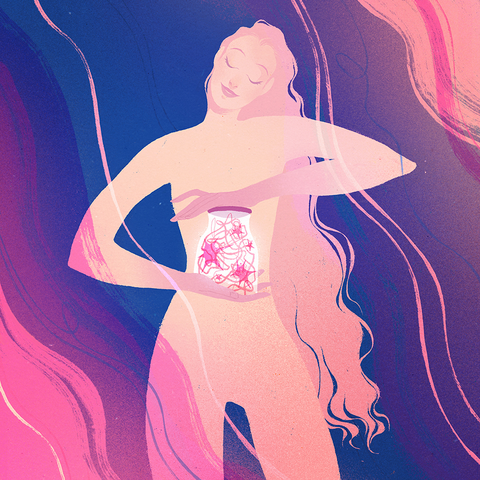 If you have SO-OCD, you don’t have to suffer in silence.

Exposure and ritual prevention therapy (ERP) is an incredibly effective OCD treatment that’s been proven to work very well with SO-OCD. Approximately 50 percent of OCD patients benefit from ERP alone, with no additional therapy or medication required, per a 2005 study in The American Journal of Psychiatry. “The name itself describes the treatment,” says Ching. Here’s how it works: A therapist exposes their patient to the thoughts, objects, or situations the patient is afraid of—in this case, the idea of their sexual orientation changing—then prevents them from turning to the compulsions they rely on to self-soothe.

“Over time, repeated exposure to feared situations would allow you to develop alternative ideas around these situations,” Ching says. One important note: While ERP might seem easy, it’s not something you should attempt on your own, experts say. In many cases, it can be an extremely distressing experience (about a quarter of patients drop out of ERP because it’s so difficult and inherently anxiety-provoking). Without the assistance of a trained professional, it could easily make your symptoms worse.

“I’d force myself to think through the various women I’d dated and crushed on in the hopes of ‘proving’ my queerness to myself.”

For Erica, it was an early episode of SO-OCD that ultimately helped her recognize her attraction to women and come out as bi. “I was never afraid of being bi,” she says, noting that it wasn’t attraction to women, but losing her attraction to men, that set off her panic alarms. Whether you’re straight, gay, bi, or something else entirely, struggling with SO-OCD, or just questioning your sexuality, your reactions and desires are often the most important guides you have.

Tuning into those is, ultimately, what helped me. By the time I realized that all my panicky worries about being straight were OCD, I’d gone through enough ERP and OCD therapy to know how to handle the thoughts. Instead of running through a list of all the women I’d happily dated, or thinking about the intensity of my crushes on women, I simply focused on a single, obvious truth. Straight people don’t feel terror at the idea they might be straight, I told myself.

No matter how frenzied my thoughts got, my emotional response offered the most important insight of all. I worry about losing my attraction to women because it’s so important to me. If I wasn’t attracted to women in the first place, I wouldn’t care at all.

8 Uses For The Pill Other Than Birth Control

How To Update The Privacy Settings On Your Devices

The 19 Best Mattresses For Back Pain

How Do You Get Rid Of A Migraine—Fast?

The 8 Best Probiotic Supplements For Women

Can A Daith Piercing Help With Migraine Symptoms?

How Long Do Migraines Last?

Should I Delete My Period-Tracking App?

The Best Vitamin D Supplements, According To An RD